The Jägershoff is the most important and largest brewery in all of Eden. It is also known as the capital of alcohol, because the Krüger family knows how to make every kind of alcohol that can be found in Eden. Boris Brew, aerial wine and goblin milk, they know the process and the taste.

Here you will also find information about the brewery itself, the location, the Jägershoff family, the history, the alcohol process, the brewer ranking and more.

The brewery and it’s location

A fine key to making alcohol is fresh water. Some get the water from rivers or the ocean. But the Jägershoff gets it straight off the mountain. This source is one of the freshest waters you can get and an important element for alcohol. The purpose of the Jägershoff is not only the water source, but also a strategic location against wildlife or enemies. With one gate to protect the settlement and a drawbridge, the Krüger family protected this place for years and it still stands.

The Jagershof is a self-sufficient settlement because of not only the freshwater source, but also because of the environment that is rich in food from the wild life or whatever is nearby. But also because ice can be made by literally putting down barrels with water, which turns into ice. The ice allows the food to be kept longer and can sustain a siege for seasons.

On your first visit to the Krüger brewery, leaving your horse, goat, pig or thing in the stables where it will be  cared for. Next to the stables is the forge for making all kinds of things such as hooves, nails or barrels. You can also visit him if your sword, armor or tools are broken. If you walk a bit further or through the blacksmith, you will come to the carpenter, who is sometimes busy with repair work or making barrels to put the alcohol in. Then  head to the Jägershoff Tavern, where the bartender will give you a nice cold pint or something else with a kick and tell you the latest stories in Eden. You can also sit by the fire and listen to the fun stories of other adventurers. Or even meet the one and only Boris Krüger, and maybe he will tell you about his great adventures. 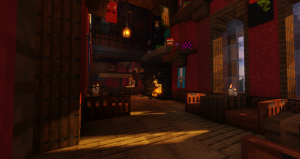 The inside of the famed Red Moon Inn

After some food and drink, take a nap at the Red moon Inn, where you can spend the night or stay for a while. These bedrooms have clean sheets, but also books to entertain yourself. Hygiene is also very important at the brewery because the place has to stay clean for the purest and best result for making alcohol. That's why there are 2 toilets, one in the tavern and one in the inn. After a long day of travelling and drinking what would be better than relaxing in the sauna, then having a bath to clean yourself up, well in this fine establishment it has that covered for your stay.

Last but not least, the most important building of the entire settlement is the brewery itself. The sacred and majestic building is the centerpiece. This is where the magic happens, and Krüger will experiment to make alcohol. At the entrance, you can taste the first brew of the day and take a sip. It's not as good as the end result, but it's alcohol and free anyway (so don't complain if it tastes bad). In front of the brewery is a water wheel to make the various machines work and is also the origin of the source. Above the water wheel sits the source and leads with pipes and scaffolding to the brewery for the fresh and pure water supply.

The man behind the brewing

Krüger is the most famous name in all of Eden for his brewing skills. He is also known by other names such as: Iron Liver, Boris Bear, Alcoholic, Master Craftsman, High Brew master and many more names. In addition, Boris is a strong and proud man because of his achievements as the Krüger brand and brewery.

Krüger's story begins somewhere in a village in the human kingdom around the year 1470. He doesn't remember much, but all he knows is that it smelled like horse poo. Boris eventually left and joined the army. He became a foot soldier in search of adventure, which he got a lot from. In his twenties, Boris fought a lot and came away with a few small scars.

After many battles, Boris suddenly got the chance to become a knight. After experiencing the horrors of war, he was done fighting and around the year 1500 he left the army to travel through the world of Eden. For the next 5 years, Boris became obsessed with travel and wandered to different races and places. He learned a lot about hygiene, civilization and cultures.

Finally, Boris came across an ancient settlement and looked for clues as to what had happened there. Only found a storage room with old barrels and smelled a pure and nice sweet and bitter smell. Boris tasted it and drank almost everything. For the next 3 days, he had a major blackout and couldn't remember much. He inspected the buildings and discovered that it was an old brewery owned by an unknown lord or owner. The settlement itself was not in a dire condition, except that repairs were needed, such as the roofs and woodwork. During his travels he learned not only about hygiene, civilization and cultures, but also about architecture and how to create it.

Over the next 15 years, he learned how to brew the alcohol, while at the same time Boris repaired and rebuilt the old ruin into a working brewery and became a true craftsman.

This brewery has been converted into a small self-sustaining settlement due to the amazing and magical craftsmanship of the man. In the present, you can happily find him in his brewery making all kinds of alcohol and serving it in the Tavern. And you all know him as Boris Krüger.

History of the brewery 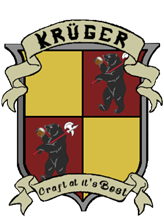 Much of the story is told in the last part called "The Man Behind the Brewing", but there is more to tell, such as the battle to create the capital of alcohol. Such as the terrible time called the rotting plague between the year 1506 and 1511. This time was not really difficult for Boris because he was far away from civilization and thereby not in direct contact with the nasty smells and death.

Being far away, it also had some drawbacks, such as repairing the brewery. Fortunately, the brewery was surrounded by mountains and forests, from which the resources came to repair the old place. This way he avoided the rest of Eden because he was self-sustaining. Also, there was a lot of wildlife around the settlement like wolves, deers and even rabbits so food was not a problem. But the biggest struggle between the years of building the settlement was the bears. The myth goes that Boris never killed a Bear with a weapon, but only his bare hands. Because of this, he also got the name Boris bear.

The Jägershoff also has a family crest to share the proud achievements of the brewery. Under the motto ''craft at its best'' you can expect fine craftsmanship from this family and you can taste and see it when you visit the brewery. The family crest also shows 2 bears because of the bear myth of Boris. The bears are holding a halberd for strength and a beer for the love of alcohol.

The process of alcohol

The process of alcohol is difficult to explain because there are different types such as: beers, wines, liqueurs, whiskey, vodka and many more.

One of the dominant in the brewery is beer. This brew has been developed over the years to deliver it short and fast. The beer takes 12 days to make. Some people take longer to make, but Boris found the perfect balance of quality and quantity for the perfect result. In this way of making alcohol, the brewery has a special drink called Boris Brew, this beer has an orange/brown color with a nice foam layer. It has a taste of orange that makes it a bit sweet and bitter. This beer is also 7%, so it's not for the faint of heart.

If you visit Eden, you will find many cultures with their own specialty, like Aerial with white wine and Zadh Nadrozz with goblin milk. But all the alcohol you get around the world, you'll get in the Jägershoff and Boris knows and can tell you all about it.

You can get the Boris Brew in any tavern in all of Eden, but it gets more expensive the further you travel. Prices may change, but the brewery is the cheapest. Suppose you are at Al Khadir then you immediately pay a lot because the journey there is far.

To learn the craft of making alcohol, you need to undergo stages to reach higher upon the ranks and eventually become a master brewer. This way Eden gets more experienced brewers to make their own special drink.

This rank is given to the highest brewer in the settlement and in Eden. It is given only by the Bear Council and is the leader of all brewers and alcohol producers. This is a title to wear with pride and not easy to get. It takes years to reach the rank, and only when the High Brew master dies does he move on to the next person chosen by the council. Nowadays, Boris Krüger has this rank because he knows all about the alcohols.

Having this rank means that you can make alcohol yourself and also be self-sustaining. You are also a member of the bear council, and you can decide on the different choices about prices and rules of alcohol. It also means that you invented your own drink and maybe have your own brewery. To reach this rank, you had to undergo the ranks of Brewer and Brew apprentice. This meant also that you spent almost 8 months learning how to craft and survive on your own. The final exam of this rank is that you have to make your brew and keg in less than 3 weeks, after you finish your brew all you need to do is take a sip to taste what you have made. After you drink an entire stein from your barrel, the Council will take a sip and decide if you could get this rank.

This rank is earned after being a brew apprentice for 5 months and spending 1 month in the wild that you need to survive and gather all kinds of resources to make any type of alcohol. This means you can work at a winery or a Master Brewer's brewery, and learn about the craft. It is not expected to know all the alcohols, but some. In this rank you are standing behind the bar and serving all the alcohol and still undergo the process of becoming a higher rank.

This is the start of becoming a master brewer. Here you shall spend 5 months sweeping and gathering all kinds of resources around the Krüger settlement, at the same time you'll learn about the alcohol and the craftsmanship of making alcohol. It is expected to know nothing about the process or the end, but in the 5 months you shall learn a lot.