Once the halls of Dar Azur were filled with the sounds of laughter, the clinking of glasses and music of many religious ceremonies. Outside lay the lush fields where farmers toiled away, inside its lower caverns were overgrown with nutritious mushrooms. Nowadays the vast halls are empty, but not barren. For strange plants and mushrooms have taken over the entire Denur hold. But these are no ordinary plants, their red spores fill the air, making the air difficult to breathe.

The ruins of Dar Azur resided within the eastern mountains. Located south of the Aerial, and north of Mitrona, it borders the great forest. As with all Denur homes it tunnels deep into the mountain.

What it is in Present time:

The most notable feature of Dar Azur is its plantlife, which is immediately noticeable once you step inside. Thick clouds of red spores hang in the air, clogging your breath. The culprit of this infestation are the numerous mushrooms that are covering the ground, as well as the vines that hang on all the ceilings. Even red trees have sprouted up in these ancient halls. But despite this outbreak the hold itself is in very good condition, the large entrance, the throne room and the famous feast hall are all still intact, waiting for explorers. 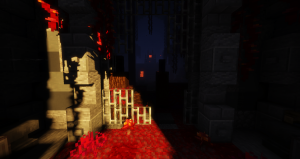 Dar Azur was one of the greater Denur holds, due to the climate and the many caves filled with mushrooms, it soon became the producer of food for all of the old Denur holds. But food was not its only purpose, it was also the place where new kings were crowned and many other important ceremonies were held. The great feast hall also remains intact and it was there that many of the most lavish festivals were celebrated, giving rise to its nickname of the “feast capital”. Because of the relative short destinace to both Aerial and Mitrona, Dar Azur was also more welcoming of foreigners than most other Denur holds.

All of that changed when the Mor-Hormung happened and the Denur society collapsed. But even before the disaster Dar Azur had already lost a lot of its former glory. Due to the constant need of food, the fields became exhausted and the Denur had to delve lower and lower in search of new mushroom caves. This food shortage combined with the rejection of Deonach led the scholars of the time to discover and develop a new species of plants. These red plants can still be seen today, for they cover the entirety of Dar Azur. Choking the once proud halls of all life.