Cape Roth is a small settlement occupied by pirates on the tip of the Southern Jungle. It is commonly referred to as Covetown since it was historically established as a trading hub between the Azari’Sol and the Attian Empire before the establishment of the tunnel at Mapledale many now use for travel. Karghos is lead by the Brethren of the Coast. A small band of mostly Ork Pirates that rediscovered the lost outpost in the south. The name Roth is derived from the elven explorer Rothilion who first sailed around the southern tip of Eden. After the Orcs established their base of operation at the holdout the name got bastardised from Cape of Rothilion to Kape Roth. The hold is known as a refuge for outlaws or mercenaries who seek to join the pirate crews in raiding an mischief and thusly gain coin. The location of Kape Roth has been lost to the minds of men after their colony was wiped out. The same goes for the Azari’Sol who themselves have been wiped from Eden. Only in ancient High Elven documents can references to the holdout be found so it’s a relatively safe haven for pirates. On the other side it is protected by the vast jungles of the South, where beasts of more ancient times still roam and form a natural barrier to Kape Roth.

The Cape of Rothilion was a shared trade post between the Attians and the Azari’Sol during the waning days of the Attian Empire the trade post suddenly went entirely silent. The sole survivor was an old man who told of an entity that slaughtered the colony. This old man named Ted 'The Slug' Lester escaped the calamity that befell the outpost and in a series of 7 treasure maps with magic riddles he hid the location of Cape Rothilion. It was Kapt’n Knaraugh Goldtoof’ who discovered one of these treasure maps inside a bottle that was swallowed by a Dragonshark he killed. Curious Knaraugh and his crew travelled the world in search of the other treasure maps and thus puzzling the location of Kape Roth. They found the treasure maps each hinting at the location of another map until finally they assembled them all. After gathering all the maps Knaraugh set on kidnapping a wood elven mage to decipher the magic riddles and revealing the location. The Kape was abandoned when Knaraugh arrived with his ship The Tidecrushah, then the waves started to roar and the tentacles of a giant Depth Krake rose out of the see and attackedthe Tidecrushah, the battle was fierce but eventually Knaraugh had to abandon ship, blowing up a barrel of alchemist fire to try and take out the Depth Krake that devoured the Carack. The beast although badly hurt survived the ordeal and sank the Tidecrusher to the abyss. The creature that yet roams these waters is a thorn in the eye of pirates. Although they sought to avoid it the pirates have found a way of coexisting with the Kraken. Whenever a pirate raid occurs they make a sacrifice to the creature by tying an unlucky victim to an anchor and dropping it into the ocean where said prey devoured by the titan of the seas.

Having arrived in Kape Roth the Pirates settled in using the washed up wreckages for cheap barricades and housing. The pirates of Kape Roth tried to venture into the jungle but were repelled by the beast that still roams their. It was at this point that Kapt’n Knaraugh lost most of his crew. The remaining survivors ventured back to Kape Roth, in the tales they told of this beast of yore they gave it the name of Minhocao and it resembled a giant wormlike creature that stalked the high grasses and palm trees in search of fresh blood. The returning pirates tried to mutineer against Kapt’n Roth who cleverly asked the fellow pirates for a vote which he won by 1 vote after he cheated and voted for himself as his opponent abstained from the vote. After Kapt’n Knaraugh was elected Kapt’n again he keelhauled the entire mutineer crew and fed his opponent to the Kraken as a sacrifice. Afterwards he set upon creating a Pirate Code. The Pirate Code of Knaraugh would restore stability and order to the Pirates of Kape Roth who each and everyone of them henceforth received an equal share in the loot, with exception of the captain, the quartermaster, helmsman and the cook. Each and every member of the crew also has the possibility to call upon a vote to replace their captain. This is to reduce the level of violence on board. They called themselves the Brethren of the Coast and everyone who dared enlist to their crew was accepted after vowing to honor the Pirate Code of Knaraugh and adhering to the raiding and customs.

After establishing order in Knaraugh he made the Pirates of Kape Roth one final promise. He promised them more gold and plunder they could ever imagine and he’d promise them the possibility to sail the sails forever and eventually to kill the Kraken that banished them to the jungle. In 1522 Knaraugh and his crew tried to escape the jungle in search of a ship, or Carack as he calls them yearning back to the mighty Orc warships of old. His entire crew with exception of Krizzie Necksnappah managed to escape the jungle making their way to Al-Khadir to buy or “commandeer” a barge to set sail on. Eventually they set upon an elaborate kidnapping plan to capture notable Hadrians and steal a proper seafaring ship to sail back to Kape Roth and thusly start raiding again.

The Pirate Code of Knaraugh

The Pirate's Code is a long list of rules on how a pirate should behave. This code was set down in the Pirata Codex by the Brethren of the coast, authored by Kapt’n Knaraugh Globtoof’ and Krizzie Necksnappah to promote limited cooperation among pirates and to protect piracy in general.

The code is based on agreements made by historical pirates and their crews for the running of their business. These guidelines were to ensure order and mutual benefit.

SO FOR THE RULES 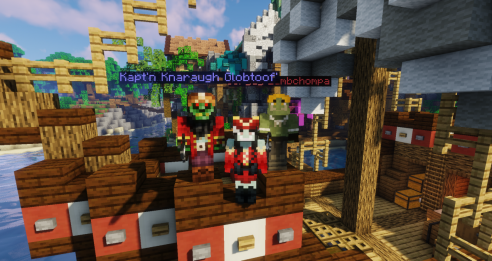 2. All adherents of the Code pledge to be bound together as a brotherhood of pirates, sharing alike in one's fortunes and troubles. Every member shall have an equal vote in the affairs of the moment and equal share of the provisions. Every pirate shall obey the Code. Anyone who fails shall be marooned on a desert island, and left ashore with a loaf of bread or hardtack, a bottle of water, and a crossbow with one bolt to load.

3. The captain of a ship is to be elected by a majority vote of its crew. If any time a crew, with sufficient evidence, finds their captain to be lacking in ability or offensive in nature, a new captain may be freely elected amongst the ship's members. The captain shall be made aware of the situation and will graciously step aside, assuming another position on the crew. Failure to follow this procedure will be deemed mutiny.

4. Any pirate who has suffered an injury from pillaging, plundering, hijacking, swashbuckling, or other pirate duties shall receive compensation for the wound from common stock.

5. Every member shall have an equal share of fresh provisions, however they may be acquired, and may take pleasure in such provisions at will, except in times of scarcity. Until said scarcity is voted over, it is necessary for the common good of the crew to adhere to rations. Anyone who takes more than his equal share of provisions at any time shall be marooned. Any Pirate susceptible of eating any foodstuff rendered pernicious shall see the ship surgeon post haste

6. Each man shall keep his weapon, whether it be a cutlass, sword, pistol, or other piece, clean at all times and ready for action (i know mine is)

7. If a pirate is the first to locate a prize and should find among this plunder a weapon that is better than his own, he may take it as his own. The rest of the items will be chosen in turn with the captain first, master second, and so forth in seniority. Ship's musicians may lay claim to any instruments found among the spoils.

8. No pirate shall strike another while onboard the ship. In the event of such an occurrence, the quarrel shall be resolved on the shore by a crossbow, sword, or in another agreed upon manner as deemed by the captain. Limbs or other body parts lost in duel are not to be compensated as those lost in battle.

9. No man shall game for money in any form, whether it be with cards, dice, crab claws, barnacles, or any other means. Unless with permission of the Captain.

10. Lights and candles must be suffed out of eight o'clock. If any man desires to drink after such time, he shall do so on the open deck without lights

11. No man shall smoke tobacco in the hold without cap to his pipe or hold a candle without lantern shield. If he is discovered doing so, he shall receive such punishment as the captain and company see fit

12. All musicians shall have their only day of rest on the Marketday. Any other day, musical pirates shall be granted leisure time only by favour of the captain or quartermaster.

13. Every member of the crew shall be allowed a shift of clothes. These may be obtained by plundering, stealing, or borrowing.

14. If a pirate is captured by an enemy ship, he has the right to declare parlay, or temporary protection, until he may have an audience with the enemy captain. At this point, he cannot be harmed. Parlay is not considered concluded until said captives and captains have completed negotiations.

16. If any Man shall steal anything in the the value of a piece of eight (8 andros), he shall be marooned or shot

17. Good quarters to be given when craved.

18. He who falls behind shall be left behind.

19. Take what you can, give nothing back.

20. No boys or women on board with exception from the captain’s choice. Any pirate found seducing women and carriying them to the sea in disguise shall suffer DEATH

Kape Roth is home to one of the few voidal portals in Eden. The portal is shut somewhere in a cavern but still slowly corrupts the jungle. The pirates view Minhocao as a creature escaped from the void and thus instils horror to the jungle. The ancient jungle is the origin of other civilisations hidden in the claustrophobic green palm sea.