The High elf we like to call Fynenar stands at about 205 centimeters (6’8). His eyes are a light-gray/green color. Fynenar has a very pale skin color accompanied by long silver hair he usually wears in a ponytail. The muscular body of this High Elf is covered by his red clothing that he combines with his Silver Cloak armor. This armor that consists of Silver plating  is finished off by his polar bear cloak that he wears over his shoulders and back. This cloak symbolizes his position as Silver cloak and thus the Therri’cills emisarry. The Silver plate is finished off with gold details and golden shoulder pads. This set of armor is completed with a Silver crown, that is decorated with gold details.  As far as jewelry goes he wears a golden ring on his left hand, on this ring sits a dark red ruby that he got from an old necklace of his mother.

Though Fynenar has the appearance of a true warrior, which he is, he is also very nifty in his ways of politics. During the years that he had to climb through the ranks he learned the ins and outs of High Elven politics. These skills as a politician and as a warrior help him in his eternal mission  to rid all impurity out of the Glade of Dragons. His skill with a blade is accompanied by his skills as an Arma’goi, making him a warrior mage. Furthermore Fynenar has a dislike for anything that isn’t a High Elf or Wood Elf, and usually looks down at any other race. He is afraid to touch impure things and usually carries gloves around for this exact problems. In his free-time Fynenar likes to spend his time praying to the mother and meditating on either a mountaintop or his self-cast cloud. 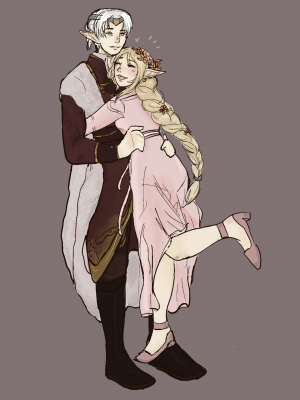